Ready to integrate Bixby intelligence with your SmartThings device? Follow this Quick Start Guide to get started.

This guide shows you the basics of Bixby Home Studio (BHS). You'll learn how to:

Launch BHS in your browser by visiting https://bhs.bixbydevelopers.com. 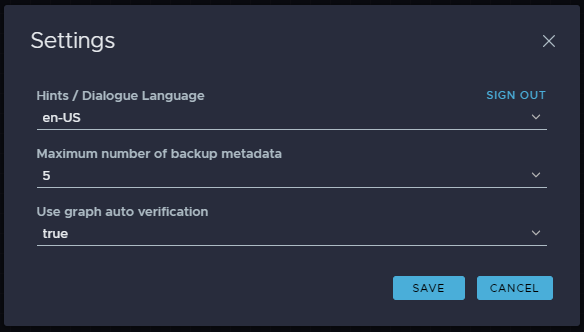 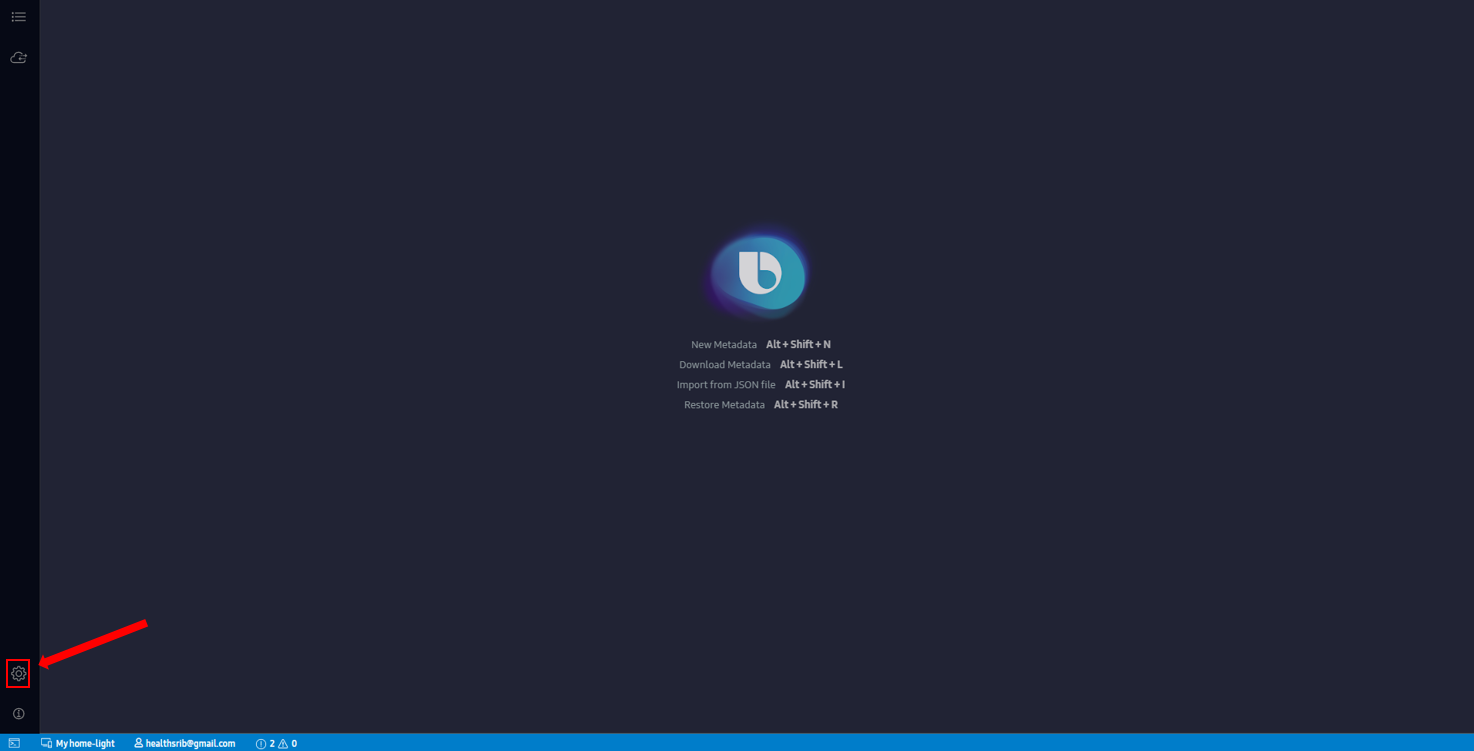 Here's how you configure BHS for your device:

Since you haven't created a BHS Project yet, you'll be prompted to do one of the following:

Click the New Project button. In the future, you can use the first three toolbar buttons on the top to create, download, or import new projects. 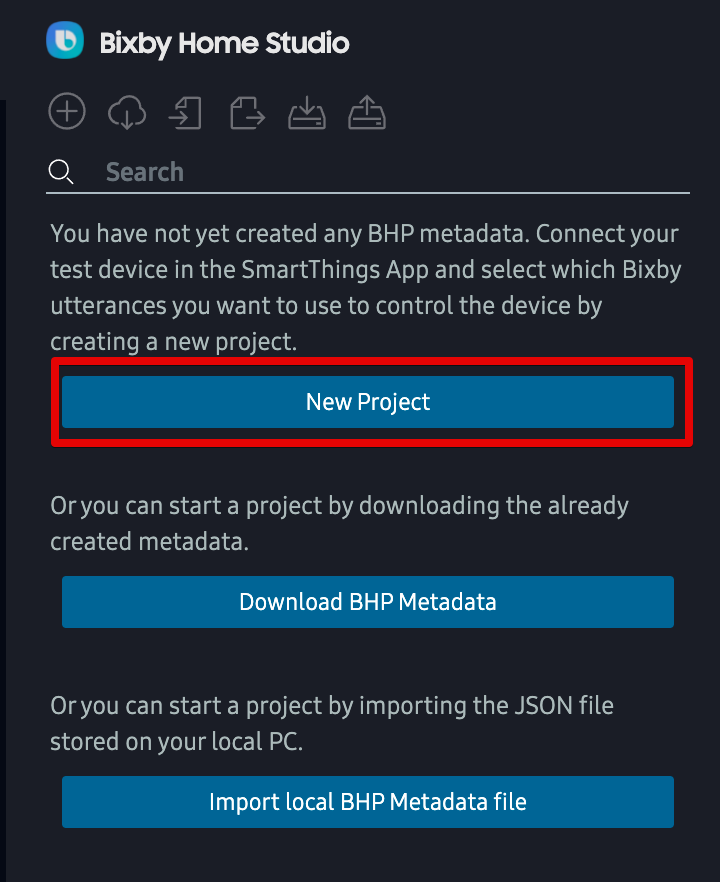 The next screen prompts you to fill in the project's device and metadata information.

Fill in the following information:

Choose how to create the initial metadata from these options:

For the lightbulb example, select the first choice. Then click NEXT.

You can edit the metadata after the project is created, by clicking on the BHS Metadata icon in the left sidebar.

BHS now displays its main editor screen with the voice intents you added, displayed in the Voice Intents section of the left sidebar. 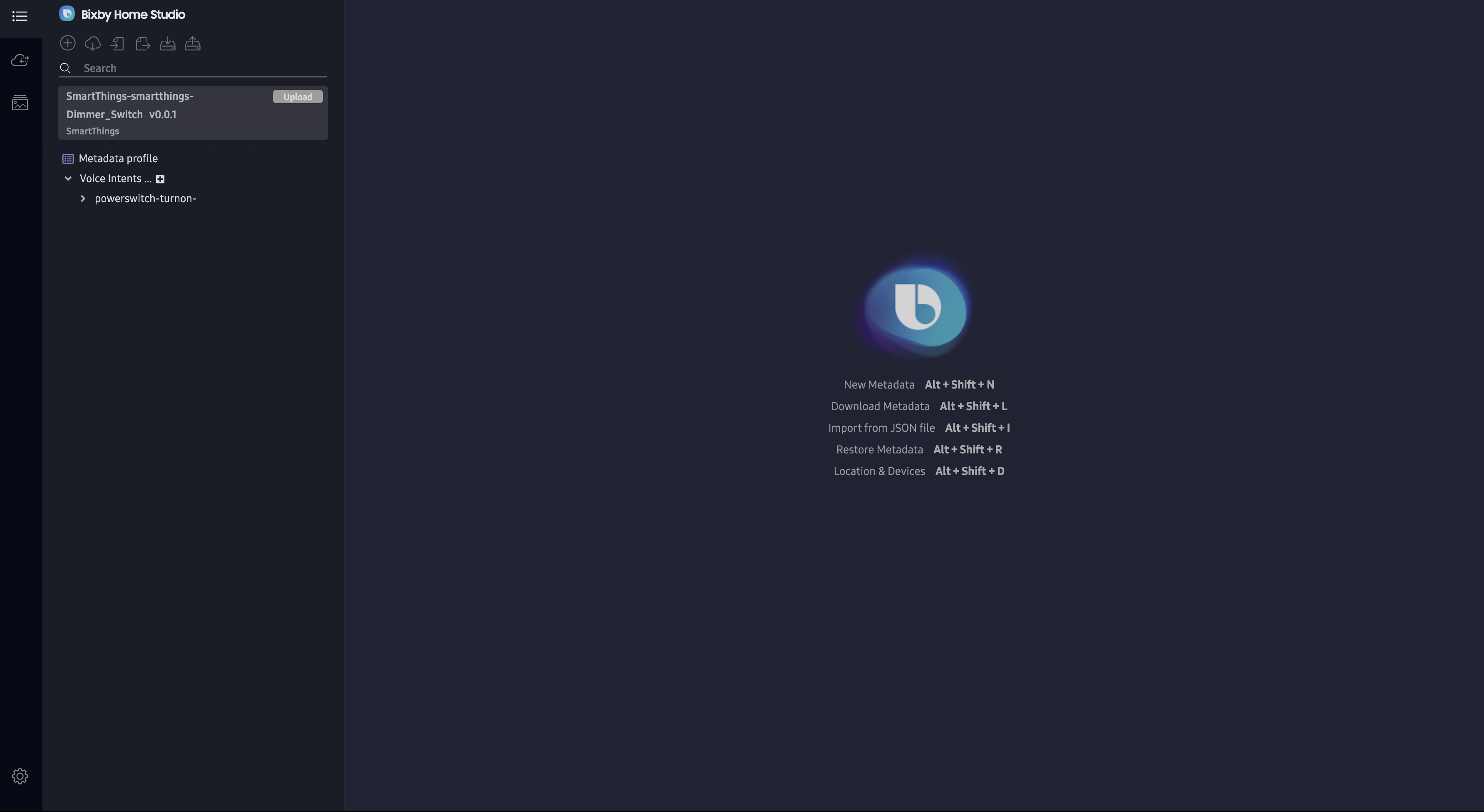 Expand the voice intents to see the Property and Graph links. 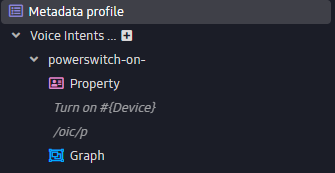 For more information about the editor screen and how to add more voice intents, read How to Use the Bixby Home Studio Editor.

To specify what action the device should perform for a voice intent, you need to associate the voice intent with an action flow. An action flow is a graph consisting of linked nodes of different types that create a logical sequence of actions. Nodes are the functions that developers can use in BHS.

A node consists of the following components: 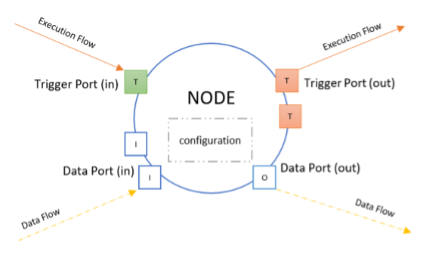 Follow these steps to create a logical action flow for a specific voice intent for the device.

Place the Start and Command Nodes

A Start Node triggers an action flow. The user triggers the Start Node by uttering a relevant command. The Command Node sends a command to the device. 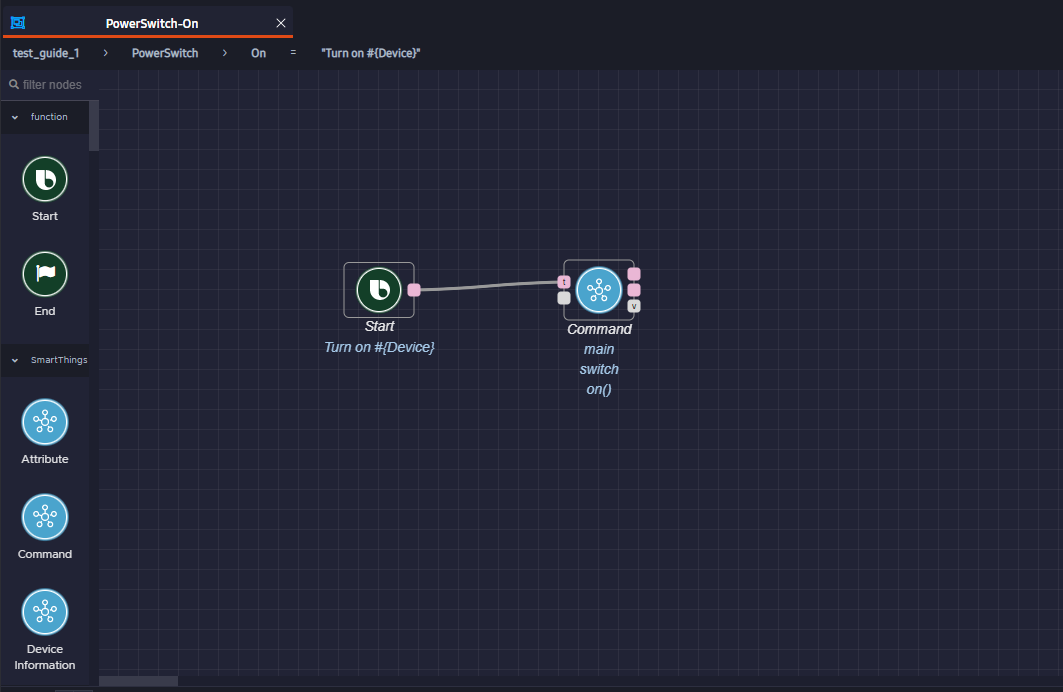 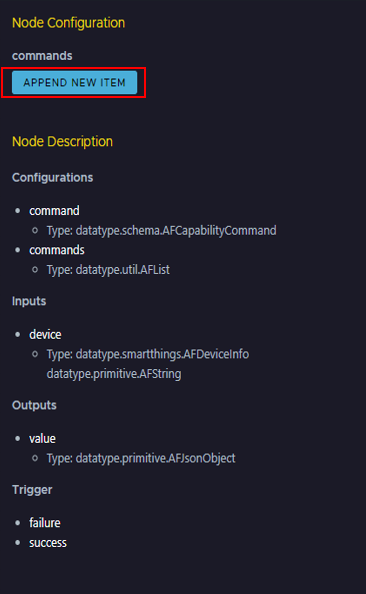 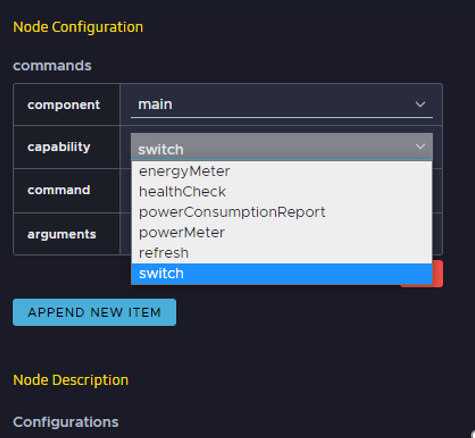 You have now created an action flow that sends a Switch on command to the light bulb.

Response Nodes inform users about the success or failure of the device commands. 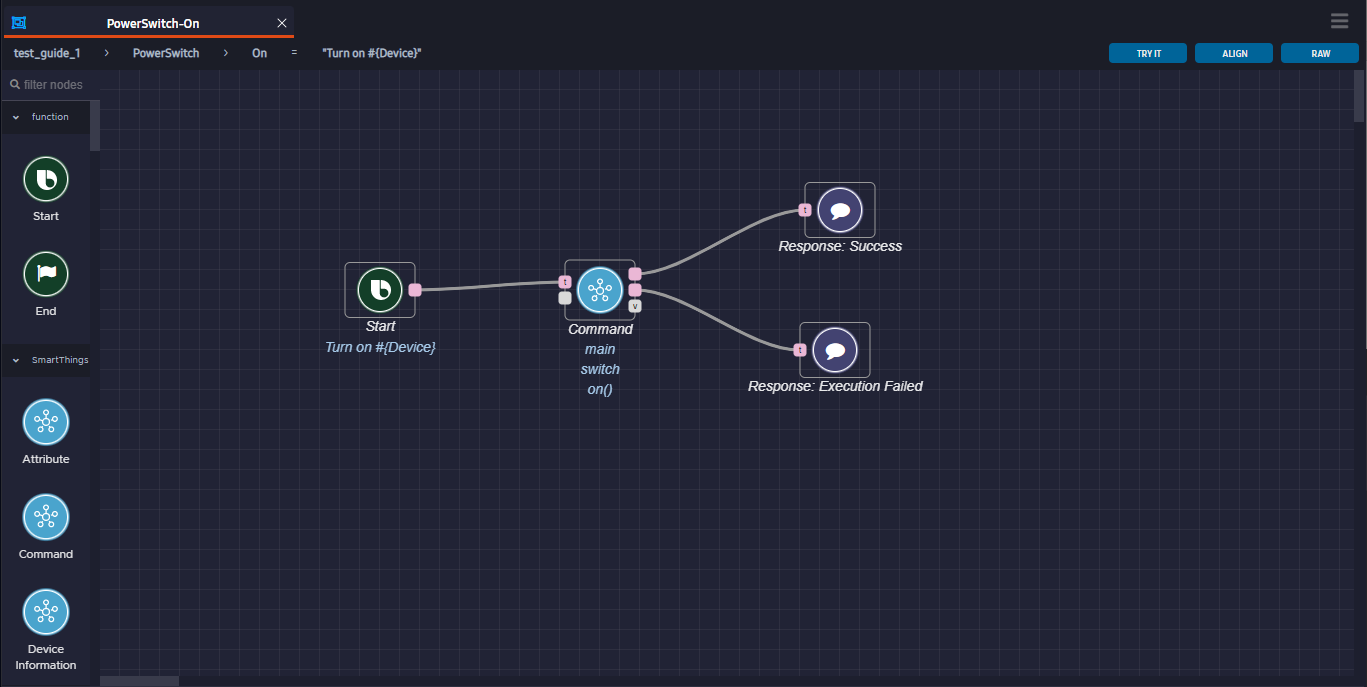 Test in the Editor

Use the Try it feature of the editor to test if the action flow works as intended on a real device. Make sure your device is turned off. Then click on the Try it button in the menu bar at the top. 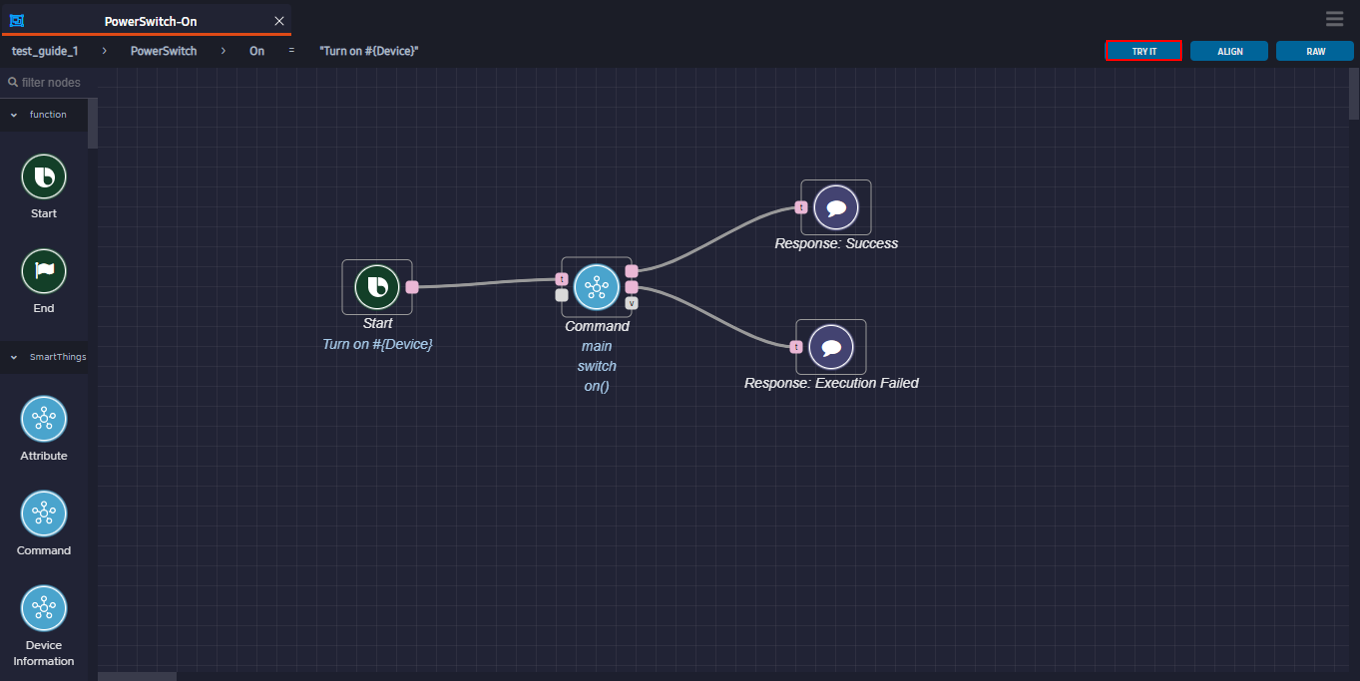 You should see a confirmation that your device is switched ON. You can see the green flowing line over the execution path as shown below. Any obtained values, responses, etc. are shown below the corresponding nodes. 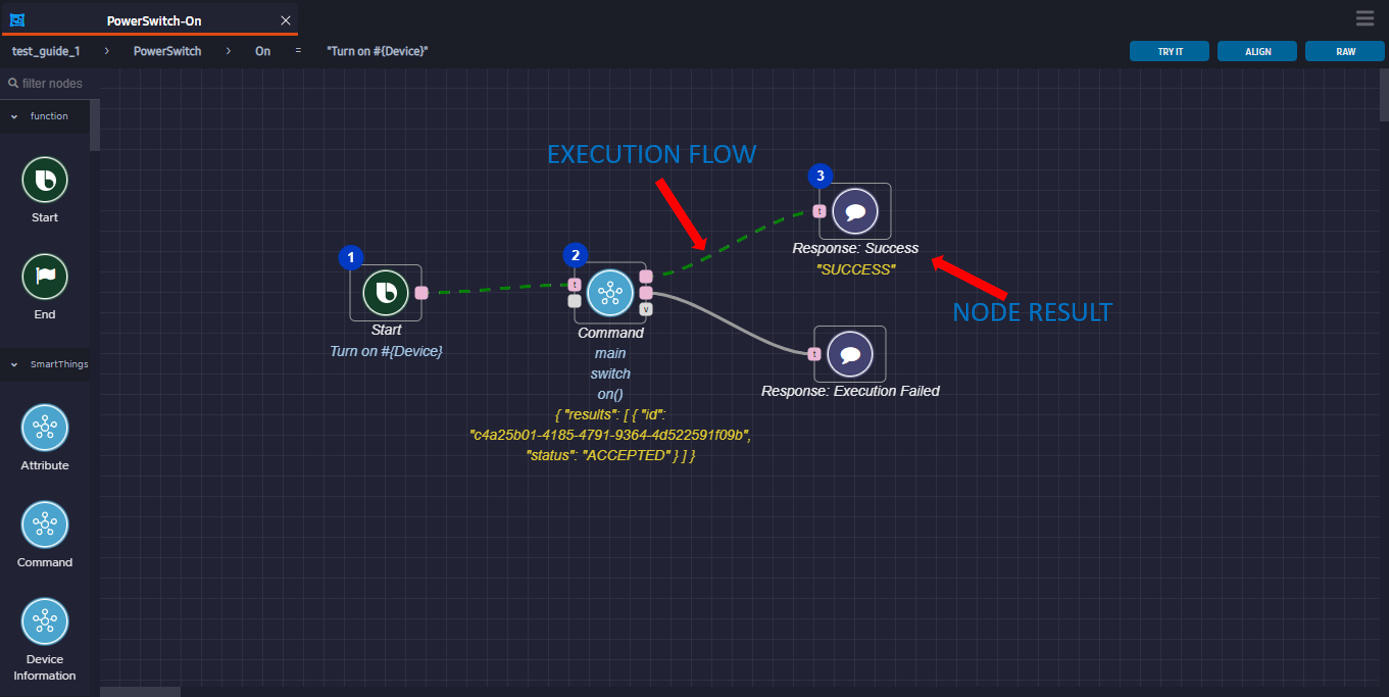 You've now successfully created and tested an action flow for a voice intent! The action flow created for this tutorial is simple, but you can choose to add additional nodes to create a more complex action flow. You can also add action flows for additional voice intents that you want to include in the Voice meta information.

To take a deeper dive into BHS capabilties, read the various Developers' Guides for BHS.